Increasing self-sufficiency and diversification of livelihoods amongst the San

The Harambee Prosperity Plan (HPP) as well as the new National Development Plan 5 (NDP 5) that was launched at the end of May this year speaks of working together, but also becoming self-sustainable as a nation. The San have been working towards this goal for years. Within the last month alone the community is seeing the fruits of years of support and investment in the San communities in Nyae Nyae and Na Jaqna Conservancies paying off. This is a testament to their hard work and a clear outcome of the consistent dedicated work of the San to improve their livelihoods and situation.

The combination of focused and empowering support from both local and international organisations like the Nyae Nyae Development Fund (NNDFN), European Climate Fund Project,  alongside the dedication and hard work of the community have produced a wide range of sustainable livelihoods. This is having a real impact and is increasing the welfare and independence of the San in these areas. Something every community seeks and aspires to, allowing for increased self-worth and further investment in the communities by its members.

A prime example is the start of the Devils Claw season this year. The community was able to negotiate the highest price for organic Devils Claw ever. Each year the conservancies take on a bigger part of the process of liaising with buyers, harvesting, preparing and selling Devils Claw to reduce its dependence on external support. This new situation has created a vital source of cash income which benefits women and men equally according to the amount of work they do.

Agricultural activities are now playing a significant part in providing healthy and more diverse diet for the community. This ensures food security, self-reliance as well as allowing the community members to develop their agricultural skills with the assistance professionals. The basic farming activities have now graduated to more advanced techniques. These include; propagation to produce their own seeds and be able to develop several farming cycles. As well as Co-planting herds and flowers to deter pests naturally, so that dangerous pesticides do not get into the water and damage the organic reputation of the Devils Claw harvesting in the areas. 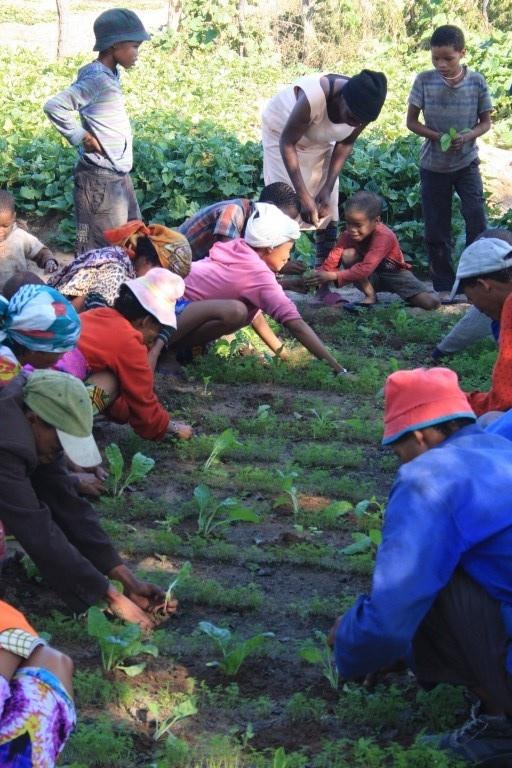 These activities are essential for the balance within the community. One positive set of activities undertaken by the community should not undermine or cannibalise another project. This has been essential to their continued growth and success over the years. As was linking agricultural activities to nutrition and diets with a greater proportion of fresh food. This promotes healthier bodies and visibly improved physical capacity of the community members, starting with the vital nutrition for the children.

These initiatives alongside the pledge by the Namibian Government in NDP 5 to engage with the local San communities and to have the unemployment rate decreased to 45% by 2022 show real long term promise for the local San communities. With present poverty levels at 35%, and only 60% of the San accessing primary education, the government’s newly launched initiative to reduce poverty amongst the San could change their future.  Renewed efforts are needed to address these poverty and education gaps as the community themselves create livelihoods and the means with which to sustain themselves. This can start with improved resources for schools in San communities so that the community become more employable and this with diversified livelihoods they come closer to being a wholly new self-sustaining community in Namibia. The will is there from the communities themselves, together with the NDP 5 pledge, it can be realised.