Namibia is a dry country, we all know that. Its people have manged to live, survive and thrive here for thousands of years. Just look at the indigenous communities like the San. The San in Nyae Nyae Conservancy who live and care for the areas where they live noticed a trend. A dangerous trend, one where more area was damaged by fire each year. In the Nyae Nyae Conservancy, in 2010 over 50% of the conservancy area burned and despite some fluctuations there was a continuous upward trend which if not addressed in one way or another would seriously impact and threaten the survival of the community as well as fauna and flora in the area.

In 2013 it was decided that increased surveillance of fire was necessary as well as taking a pro-active management approach. Initial attempts to introduce early burning or fuel management while welcomed by the community were not as well accepted by others who supported fire breaks and fire fighting. Even though this had been amply demonstrated to be ineffective in an area of 9,000km² with vast inaccessible areas.

In that same period awareness of the scale of the problem was shared with the community, who it was assumed were partly responsible for some of the fires. Making the community aware of their part in all of this seems to have started to impact on the scale of fire. In 2014, as a registered Community Forest, the Nyae Nyae community started to pro-actively manage fire using methods that they had traditionally used. This involved burning around villages and precious resources in the winter months when the threat of uncontrolled fires was reduced.

Using Remote Sensing based burned area history maps and Normalized Difference Vegetation Index (NDVI) data, the project was able to identify ‘high priority’ areas. These are areas where there had been a higher than average build-up of fuel around villages and in resource areas. These areas were then targeted to remove the excess fuel and reduce the risk of the annual hot uncontrolled fires in September – November destroying villages. (See diagram below)

Initially it was assumed that a fire management plan could be produced and repeated annually. However, it soon became clear that this was not the case and that the data needed to be reviewed each year and a plan made at the start of every dry season. This plan would be based on priority areas and when areas were dry enough to burn (starting too early meant resources were wasted trying to reduce fuel loads while it was still wet and would not burn).

The 2017 priority burn map below shows relatively few areas with high or very high fuel build up, especially around villages marked with rings. Thus relatively little intervention was required in 2017. 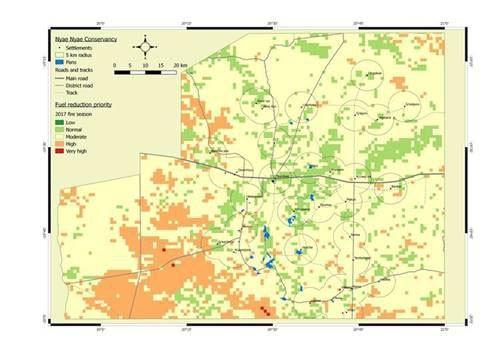 In contrast, the 2018 priority burn map shows a much greater volume of fuel build up and consequently greater intervention was required. 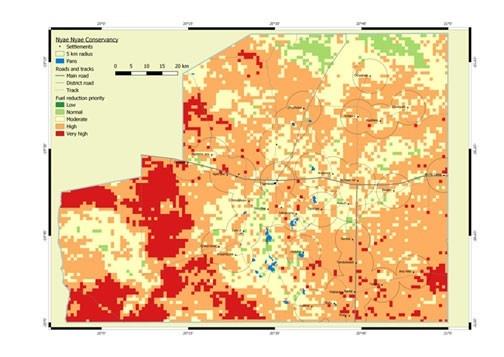 Looking at annual data of how much and how often the area burned from 2009-2018 created a picture of fire in Nyae Nyae over the last 10 years. Collating and grouping this data into ‘before interventions’ (2009-2013) and ‘after interventions’ (2014-2018) we get the following pictures.

Average extent of annual burn: 39%, Red areas show where burnt and the darker the red, the more often the area burned during that time period. 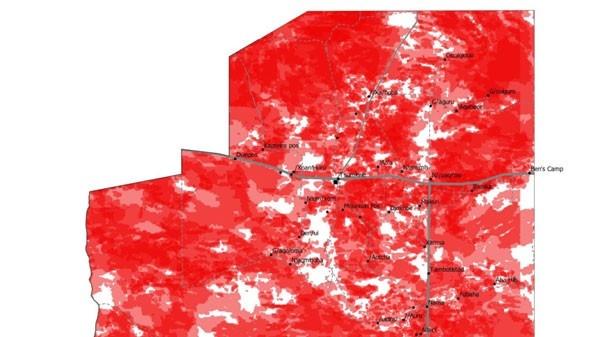 Average extent of annual burn: 16%, Red areas show where it burnt and the darker the red, the more often the area burned during that time period. 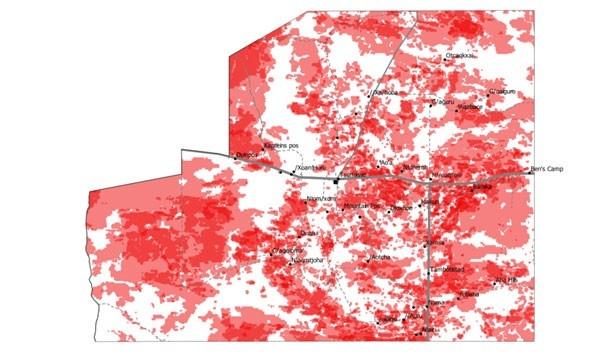 The NDVI are comparable over these two time periods, so the variance indicated between the two periods is not due to differences in rainfall or vegetation growth.

In addition to the extent and frequency of fire being reduced, the timing of fires was shifted to the mid-season (Jun-Aug) rather than the later hot season (Sept-Nov) when fires are likely to be hotter, causing more damage and being less controllable.

The project will continue in the coming years, so that data can continue to be collected and a viable alternative approach to fire management in large rural areas be further cemented. It is essential that this work continues as this really is about life and death for the people living on the conservancies. It is about their cattle, their food security and their way of life. Controlling the fires using new methods and tried and tested traditional ways of harnessing, managing and mitigating the damage of the fire will continue to be assessed, giving the conservancy more control over their lives and livelihoods. 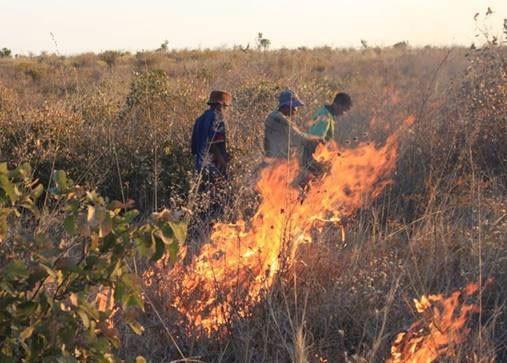